Ovulation takes place when one or more of the eggs are released from one of the ovaries. This transpires usually during the fertility time between periods. Every month, around 15-20 eggs are mature inside the ovaries. The ripest one is swept into the fallopian tubes. These tubes connect your ovaries to the uterus.

In order to conceive, one of your eggs and your spouse’s sperm has to meet in the fallopian tube. The egg’s survival period is not more than 24 hours after you are ovulated and hence the egg and the sperm need to meet to fertilize within this time. 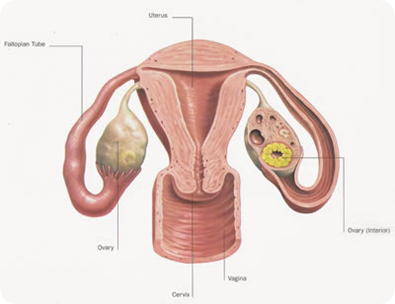 But the sperm can survive up to seven days in the fallopian tubes which means that sexual intercourse need not be timed to the exact moment of ovulation in order to get pregnant. You do have a fertile time span of six days. This includes the five days before and the day of ovulation as well. The easiest way to calculate your most fertile days is to note down the length of your period. Then observe carefully the signs of hormonal and physical changes in the body. Five days before you ovulate, you would be able to notice signs that you are indeed fertile.

Ovulation occurs between 12-14 days before your menstrual cycle starts. Since this is an average, it could be a couple of days prior or later. Most women have irregular menstrual cycles. If so, ovulation may occur a week earlier or later from one month to the next. Calculating your fertile dates using period cycle dates is highly inaccurate. Hence it is more relevant to learn to spot your body’s fertile signs.

Some women have aches in their bellies, one sided back aches; ovulatory pain can be a useful guide to indicate that you are fertile .On certain days; you may feel sexy and more sociable. You sexual desire too may peak at this time. You are more likely to feel attractive as you near ovulation. You smell good too and might be pleasant to men at this time. Having intercourse when your cervical mucus is wet, slippery and receptive increases your chances of conception.