Most pregnant women do not envision giving birth to twins, triplets or more babies. Several factors play a vital role in determining who will have multiple babies. Women over 35 are more likely to conceive multiple babies, or if the tendency runs in the family.

A multiple birth pregnancy is always a high risk one. Any pregnant woman can experience various concerns such as gestational diabetes, anemia, water retention, vaginal bleeding, preeclampsia, kidney infection and so on. Yet there are other possible concerns in a multiple pregnancy. Vaginal bleeding in the earlier stages of pregnancy can be a little heavier than normal in the case of multiple pregnancies. There might be increased bouts of nausea and extreme fatigue due to vast amounts of hormones raging through the body. 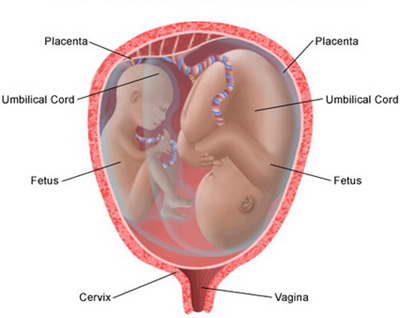 An incompetent cervix may be the cause of bleeding in early pregnancy and most often, the mom-to-be is advised to take bed rest with the lower body elevated above the head to relieve pressure on the pelvis. A condition called abrupt placenta can occur in the twentieth week of pregnancy. This is when the placenta partially detaches from the uterus resulting in pain and bleeding. This condition is more common in multiple pregnancies.

Most women pregnant with multiple births develop iron deficiency anemia. This adversely affects the babies’ growth as well as increase complications during pregnancy. The doctor may prescribe additional supplement s to ensure that deficiency won’t be a problem for the mother and her babies. Multiple babies grow at a slower rate than single babies due to unequal sharing of available nutrition. The risk of preeclampsia is more common in multiple pregnancies. Bed rest is usually recommended and in severe cases, hospitalization and medication is advised to lower blood pressure.

Preterm labour is a major cause for concern in multiple pregnancies. Although most premature babies do survive very well, they are undoubtedly at a higher risk of facing medical problems throughout life. Hearing loss, vision problems, developmental disabilities and delays can occur. The more premature the baby is, higher is the risk of cerebral palsy. Bed rest will be prescribed if there is a danger of the mother –to-be going into preterm labour or if she displays signs of stress.

Bed rest minimizes blood levels of catecholamine, the stress hormone that can trigger contraction and conserve energy so that what the mother eats goes directly to promote the babies’ growth.