Nightmares and night terrors are common sleep disorders in children of small age.

Night terror is a condition in which the child is partially awake from sleep and shows abrupt behaviour like screaming, kicking, panick, mumbling, sleepwalking etc. Mostly these incidents of night terror occur after two hours of sleep. If a child less than 7 years suffers night terror, it is not a serious concern. These night terror episodes mostly end with a deep sleep. 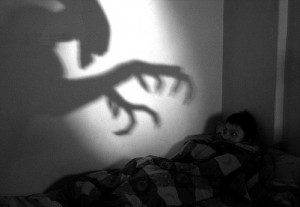 HOW TO HELP THE CHILD –

A nightmare is a scary dream which frightens the child greatly and he feels restless and unable to go back to sleep. There is no concrete reason behind the phenomena of nightmares but it is believed that all those things we see or hear in real life could effect our dreams. Younger children see the nightmares mostly about monsters, demons, new places whereas toddlers usually dream about their seperation from their parents in nightmares.

To save your child from nightmares try not to tell him monster stories, tell him good and pleasing sort of stories instead. You can also give him a soft toy to give him company in his bed.