“Prayer is an act of communication with the sacred or holy – God, the gods, the transcendent realm, or supernatural powers. Found in all religions, in all times, prayer may be a corporate or personal act utilizing various forms and techniques.” 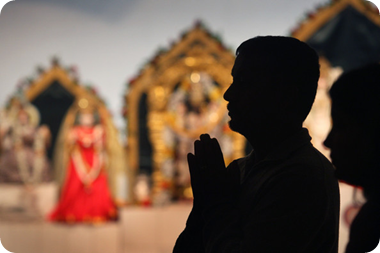 This brings out two main ideas. One, that prayer is at the heart of all worship forms and second, that it is ‘communication’ with a higher being. It is thus worth looking at how different religions in India understand the meaning of prayer and the way that gets manifested in the different worship forms.

The word for prayer in India especially for those languages that have a Sanskrit origin, is prarthana. In Hinduism, such prarthanas are usually closely related with mantras, rituals, and puja celebrations which are performed to appease the gods or to ask for blessings for the fulfillment of individual desires or communal goals. The Hindu scriptures also emphasize that sincere prayer in the form of mantras and pujas will surely yield results.

Within the Hindu belief, the structure and purpose of prayers are connected with the four aims or, purusharthas of human life. These were dharna or religion, artha or material wealth, karma or work of the hands, and moksha or salvation. Prayer is thus not only a means to connect with the inner self but also a way to achieve all these three aims as well.

For Christians, the emphasis is more on a relationship of love and friendship with God. In the protestant faith, prayer is the foundation of a relationship with Christ which enables the believer to always know the will of God and to know His will for their lives. In fact, St Teresa of Avila, a 16th century Spanish mystic describes prayer as “an intimate friendship, a frequent conversation, held alone with the Beloved”.

In Islam, prayer is again at the forefront of the faith. It is made obligatory by the Quran as being the most important duty of fellow Muslims. By making the practice of praying five times a day mandatory for devout Muslims, prayer ensures that name of Allah is remembered throughout the day so much so that the essence of Allah remains in the person and on his/her actions. Thus, prayer not only offers a deep connection with Allah but is also a means to repent and to restrain from evil deeds.

But whether prayers are ritualistic, or rhythmic chants or a prose communication, it cannot be discounted that they are an essential part of one’s spiritual journey and growth.