Being needed is probably the most important aspect for human beings to feel motivated to do things. ‘Appreciation’ is the second most important one. Without these two together, it is difficult to find a sense of self-worth and a sense of fulfillment. Young housewives who’ve had successful jobs before marriage often feel this lack of appreciation and need regarding their own careers that they had to leave behind. No matter how much the entertainment industry try to capitalize on the situation of modern housewives by producing shows like Desperate Housewives and reality tv shows like Real Housewives of Orange County and its many franchises, the reality is that these shows probably do more harm than good. 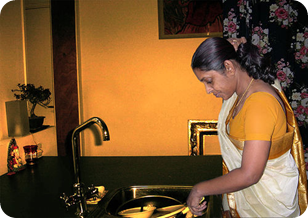 It is now a commonplace fact that homemakers whose lives revolve around the family often experience a sense of abandonment and loss when the children grow up and begin to live their own lives. The dilemma they find themselves in later on when they do decide to pick up from where they left, are factors like age and lack of experience which catches up on them. Given this context, the usual suggestions to start home-based businesses, or to join an NGO are on second glance more of a crisis management than preventive advice. It thus becomes necessary to properly plan one’s life keeping in mind one’s professional interests and background.

The key preventive advice here is to set clear goals both relating to career and life early on itself. The next step would be to constantly keep in touch with ones’s interests and work, to keep building on one’s network and to keep on contributing to that over the years. This of course can be difficult for those who were in the corporate world. But this only goes to show the importance of setting goals that are clear and attainable and to properly plan one’s life. Moreover, having these goals on paper is like possessing a road map of your future. They not only provide a cushioning against events like marriage, child-rearing or following one’s husbands to other cities but they also help in bringing a sense of control in one’s lives.

Thus, a career oriented woman who had to keep her life on hold for marriage and children need not despair that her professional life has come to an end if she could apply this key life skill of setting goals.