What is domestic violence?

It is an act of intimidation, coercion, show of power and control upon the victim who is usually a woman within the domestic household by using verbal, psychological or even physical force. Often the perpetrators are usually the woman’s own husband, in-laws or even her family. The term ‘domestic abuse’ is also used interchangeably with domestic violence. 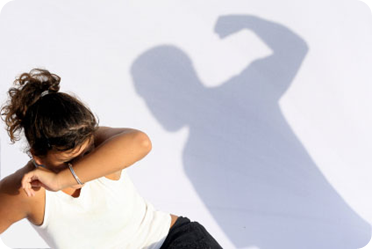 This form of gender violence committed within the four walls of her ‘home’ is a phenomenon that a majority of Indian women face everyday without even realizing it. For this reason, there are many cases that do not make it to police reports and very few make it to the courts. NCADV (National Coalition Against Domestic Violence) is right in diagnosing that the one problem with domestic violence is that they are usually underreported. One reason is that the victim usually takes a long time to understand the abuse and even when s/he does, tends to remain silent or to reconcile with the abuse. Social pressure, misguided affection, fear of abandonment work to keep the victim from speaking up.

A February 2000 Survey conducted in seven Indian cities, covering both rural and urban areas by the US based International Centre for Research on Women (ICRW), revealed a couple of key aspects of domestic violence:

One, that 45 per cent of the women who were surveyed had been subjected to at least one incident of physical or psychological violence at least once in their lifetime.

Two, that physical violence on women is all pervasive within the homes.

Three, that the prevalence of psychological abuse was high with 43.5 per cent of women experiencing at least one incident of psychologically violent behaviours like insults, threats, inducement of fear or abandonment, and

Four, working women living in nuclear families were found to be more vulnerable to violence than those living in large families. These findings shatter the myth that working women are less prone to violent acts of domestic abuse.

Although, the Indian legal system have made provisions for the victims of domestic violence to break the cycle and to step away free, social pressures continue to silence the woman. Thus, the need of the hour is for sensitization of the issue, to be able to recognize instances of domestic abuse, to make use of the legal provisions and to break the silence.