The concept of ‘respect’ and its related terminologies like reverence and honour is vital to our understanding of Indian customs and traditions. Even a casual survey of the Indian way of life would reveal this whether it is in relation to one’s parents, families, and elders or with reference to auspicious beginnings, love for the country’s leaders, its movie stars, or the launching of a new venture. But this concept of ‘respect’ can best be seen in the customary manner Indians receive their guests. 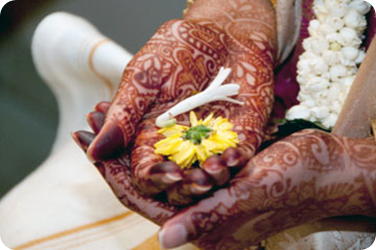 In India, guests are given special status comparable to the honour they give to Gods and Goddesses. The concept of Athiti deva bhava which literally translates as ‘guest is god’ powers these ancient traditions which modern India has inherited. According to this, guests are placed on the same pedestal as gods.

Usually, the guest is received with the customary greeting, Namaskar or Namaste. This is a general salutation that is used by everyone to welcome guests and strangers alike. The proper gesture is to join both palms together and raise them chest high to greet a person. It is believed that both the hands symbolize one mind, or the self meeting the self. Namaskar and Namaste are also used when people bid farewell to each other.

The tilak which is sometime applied on the forehead between the brows is also a welcoming symbol which also stands for anything auspicious and worthy of blessing. The tilak is made of red vermillion paste also known as kumkum. It can also be made of sandalwood paste.

The spot where the tilak is applied is also important. It is believed that this was the point at which the spiritual eye or the ‘third eye’ opens up. A tilak is also applied when bidding farewell to guests or relations. The spot is symbolic of latent wisdom.

Other customs like the touching of feet of parents and elders to seek blessings also go to show the importance of ‘respect’ and honour centered in the heart of Indian customs and traditions.