Harvest festivals in India form a significant aspect of India’s culture. Almost all of the states in India have been traditionally celebrating this event since time immemorial. Held annually and given the difference in geographical locations, these celebrations are not only called by different names but are also celebrated at different times of the year.

The celebrations mark the end of a year long labour in the fields and the beginning of rest, fulfillment and enjoyment. The festivities and the merriment can be a one day affair or elaborately spread out over a few days during which the people may indulge themselves in feasting, cultural showcasing, singing, dancing, playing and worshipping. Onam celebrations of Kerala is one such example of complete indulgence and joyful abandonment of welcoming the harvest season. 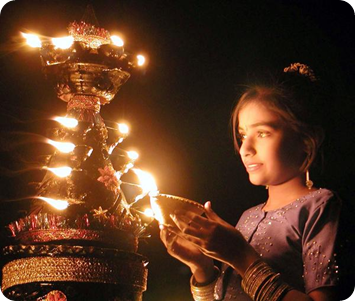 Onam is celebrated in the months of Aug-Sept which lasts between four to ten days and is considered to be the biggest and most important of festivals in the state of Kerala. For this reason, Onam was made the state’s national festival by the government of Kerala as well as a vital part of the state’s tourism both within the country and globally.

Legend has it that the festival is celebrated to welcome king Mahabali. His reign known as the golden era was one where everyone was prosperous and happy. This was much envied by the gods who later use his one weakness, his egotism to bring an end to this reign of prosperity. But because he loved his subjects deeply, the gods granted king Mahabali the opportunity to visit his people once every year. It is believed that his spirit visits Kerala at the time of Onam.

Onam celebrations begin with elaborate preparations carried out before the big day so that the festivities can start and end on a grand note. Traditionally, the first day called Atham and the tenth day Thiruonam are the most significant. On the first day, celebrations begin with the womenfolk making the traditional ‘Pookkalam’ a floral rangoli that adorns the front courtyard of their houses as a symbolic gesture of welcoming king Mahabali.

The tenth day is the biggest and the grand feast of Onasadya is the highpoint of the day. What is special about Onasadya is that it is a nine course meal consisting of 11 to 13 essential dishes. Mats are laid out on the floor for the people to sit and the food is served on banana leaves. Traditional pickles, papadams and ‘payasam’, most popular sweet during this time are also served. The importance of this feast has led to the popular Malayalam saying, “Kanam Vittu Onam Unnanam” meaning, “We should have the Thiruonam lunch even if we have to sell all our properties”.

The other star attraction during this time is the Vallamkali, or the Snake Boat Race held on the river Pampa. The boats are decorated elaborately and hundreds of boatmen take up oars and amidst chanting of songs and cheering by onlookers race against each other.

Other kinds of rigorous sports are also played during this time by the men folk like Talappanthukali (played with ball), Ambeyyal (Archery), Kutukutu and combats like Kayyankali and Attakalam. The women wear new sarees, dress up their children in colorful clothes and perform special dance forms like Kaikotti kali and Thumbi Thullal. Folk performances like Kummatti kali and Pulikali are also performed.

Onam celebrations thus not only commemorate the harvest season but it also becomes an opportunity for the state to showcase the vibrant culture of Kerala.