India celebrates a number of festivals all throughout the year owing to it’s cultural, linguistic and religious diversity. Often times the festivals may be the same but are known by different names and may vary slightly in terms of when and how they are celebrated. But almost all festivals involve certain rituals, customs, and traditions that make it festive like prayers, decorating one’s homes, wearing new clothes, feasting, visiting holy places of worship for the sake of blessings, music, dance and so on.

Among the list of many festivals celebrated in India some festivals in time have gained more popularity over the others and are sometimes seen to be celebrated in the metro cities as well if not the entire country. Some of these are: 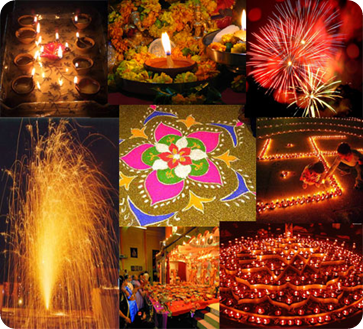 Also called the ‘festival of lights’, it is celebrated in the month of November to commemorate the victory of Lord Rama over Ravana. The festivities are spread out over a period of five days. The evenings are special where people after offering prayers to God Ganesha and Goddess Laxmi, light their houses with ‘diyas’ (tiny earthen pots in which a wick is placed), vibrant lights and candles. The lighting of beautiful fireworks are also seen in the night sky.

This is a celebration of the emotional bond between brother and sister by the tying of a sacred ornamental thread (called rakhi) on the wrist of the brother who in turn promises to protect her from harm. They then feed each other sweets after which the brother gives a gift to the sister. These days, rakhi is also celebrated by individuals who may not be blood related but believe they share a similar brother-sister bond.

Celebrated sometime in March or April according to the Hindu calendar, it welcomes the spring season and the end of winter. It is also popularly known as ‘the festival of colors’. On this day people enjoy by either smearing each other’s faces with colour or by throwing coloured water or powder on each other’s body. One day before Holi, bonfires are built to symbolize the destruction of the evil demon Holika.

The biggest Muslim festival, it is celebrated to mark the end of strict fasting as soon as the new moon is sighted in the month of Ramadan, the Islamic holy month. It is believed that the Koran was revealed to Prophet Mohammed in this month. Thus it is also known as the “Festival of Breaking of the Fast”. During this time, families get-together, friends and relatives meet and exchange greetings, prayers are offered in the mosques and special foods and delicacies are prepared.

This event celebrated on the 25th of December every year marks the birth of Christ believed to be the son of God. Popular Christmas customs include but not limited to the decorating of the Christmas tree, baking traditional plum cakes and other baked goodies, hosting dinners and feast, going to church on Christmas morning or attending a Christmas Eve service on December 24th, singing Christmas carols, and exchanging gifts. Often an adult is seen dressed up as Santa Claus handing out gifts to children at shopping malls and busy market places.

Apart from these festivals there are a host of others that are celebrated regionally or nationally. These have either a historical, mythological or religious significance. Geographical location also determines the fervor with which these festivals are celebrated. Some of the festivals worth mentioning are, Republic day (the anniversary of India’s establishment as a Republic on 26th January 1950), Independence day (India’s Independence on August 15th), Makar Sankranti /Pongal/Onam (a harvest festival celebrated in the Western and southern part of India in the month of January), Gandhi Jayanthi (the celebration of the birth date of Gandhi, the ‘Father of the Nation’), Navaratri/Dussehra/Durga Pooja (celebrated in honor of the goddesses Durga, Lakshmi, and Saraswati around the months of September – October).