There is a tube called eustachian tube in the human ear which connects the ear and the nose. When any bacteria or virus infects the lining of the childs eustachian tube it gets swollen and fills with a thick mucus. Bacterias keep growing in the mucus and increases the pressure behind the eardrum and causes earache. The eustachian tube gets blocked because of allergies, cold or other infections. Ear infections get corrected in 1-2 weeks but severe infections could take more time to heel. 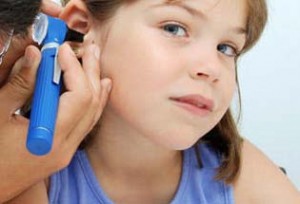 EAR INFECTIONS SYMPTOMS – Common symptoms of ear infections are ear pain and fever. A small child who is unable to speak, cries a lot and may indicate towards his ear. If no sign of the reason behind the child’s crying parents can get his ears checked by their own.

EARACHE TREATMENT – If the earache is because of bacterial infection the doctor can give antibiotics. However, antibiotics can not help in the earaches caused by viruses. Pain relievers can be used to give him relief in pain along with any drug to reduce fever. But aspirin should not be given to children less than 18 years of age because it is linked to reye’s syndrome, a desease which could lead the child to death. Warm water or any warm heating pad can be used over the ear to relieve pain. Ear drops can also be used with the consultation of the doctor. It is true that the child feels unbearable pain during an ear infection still it is suggested that the parents must wait a while before giving antibiotics to their child. Antibiotics sometime harm the child more than curing him. Antibiotics also kill the normal bacterias usually found in skin, mouth, intestine, throat etc. and as a result of that other harmfull bacterias start developing in the child’s body.

HOME REMEDIES FOR EARACHES IN CHILDREN – Earaches and ear infections of lower degree can be treated by the home remedies only. These domestic non synthetic medicines are very popular among the parents while treating non severe infections due to the high risk of side effects embedded in the synthetic medicinal treatment process.